I finally come around another posting... the occasion is the new ABC series "V". This is a remake of the old TV show of the same name from the 1980's. I watched a few episodes back then, and because the remake features a couple of the Firefly cast, I gave it a chance. The pilot ran this evening. They introduced a lot of characters (incl. Morena Baccarin and Alan Tudyk from Firefly) and followed quite along the path of the original. Overall I was not so impressed since there was about zero surprises (except the revelation of some under cover V's). It lacked overall refinement - so I don't think that this will be a sleeper hit. 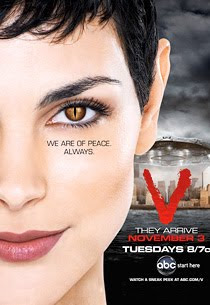