There was an article in Yahoo News about a Pacemaker that includes a wireless module (more, press release). I am not sure what the device actually does, and under which conditions. Apparently, it is possible to transmit data via RF on request through the Internet. Presumably, the carrier (a.k.a patient) needs to be within range of a receiver - which then passes the data to the appropriate target site over the internet, likely the doctor's server. The article does not say if the pacemaker runs TCP/IP, or even HTTP - probably not. But that would be just a small extra engineering step. It further does not say if the protocol can actually change the pacemaker settings, or just read something and send it out. But again, that would be just a small extra step. Hopefully the device can't be hacked or be the target of a fatal DoS attack. 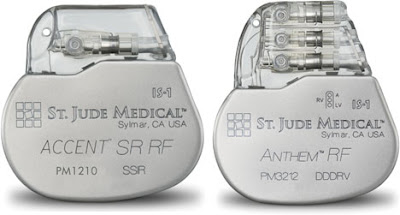