Here is the flight tale...: the SAN-PHL flight (see actual aircraft picture below) went well, but 40 minutes late, due to a "low nitro pressure in the emergency exit door" that was fixed in SAN. That however meant that we lost the connection from Philadelphia to Frankfurt. USAir handed us right away a hotel voucher and booked us on the next day. I accepted the fate, but Christina took initiative and called them up. The transcript was like this: She: Is there another flight out for Europe today? USAir: No. She: Perhaps not via Frankfurt, but London? USAir: No. She: How about the one that we see others getting into? USAir: Well, OK, that one... At the end, after painfully slow re-ticketing, with 20 minutes until boarding, we got the ticket. It went well, and they also managed the luggage to be rerouted. 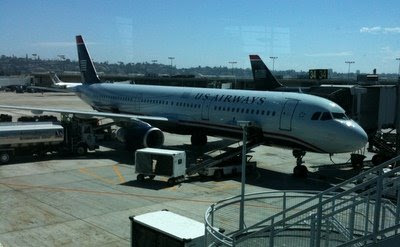