Christina and I recently watched Man on Wire per rental on the Apple TV. I think it was an HD version - however it is only out on DVD, no BluRay yet. The film got an Oscar for Best Documentary Feature in 2008, and this is well deserved - it is a really nice film, with a lot of dramatic and information. This film is about Philippe Petit and his obsession to walk a high-wire in unlikely locations. In this case, he decided to walk across the two World Trade Center towers right during the final phase of the construction. The film shows the preparation and some earlier stunts. It is nicely produced, with some scenes recreated and some original footage. It was an amazing feat, and it may cause vertigo by just thinking about it. 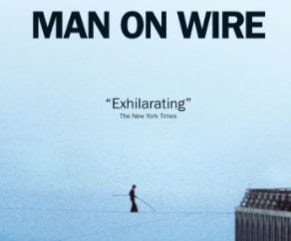